skip to main | skip to sidebar

IMPACTFUL RESULTS WHEN IT COUNTS

Graham co-hosts The Voice marketing/PR/advertising podcast for the International Association of Business Communicators in Ottawa, Canada.

A highly praised, genuine approach to audience engagement drives Graham Machacek’s success story. He has more than 10 years experience related to integrated communications. Graham is known for cultivating friendships – not just relationships – with a wide range of reporters, resulting in stories reaching hundreds of millions on a diverse set of topics – everything from Canada’s foremost science pioneers to Paris Hilton. Graham’s vertical career trajectory continues to skyrocket. And his results speak for themselves.

Graham is currently leading and project managing a national social marketing campaign surrounding volunteerism with extensive digital / social media integrations. The campaign is championed by Volunteer Canada and Manulife Financial. As communications manager for CTV’s Much MTV Group he oversaw numerous communications activities for the MuchMusic Video Awards.
Graham managed the international media frenzy that ensued after MuchMusic cameras caught Kevin Federline allegedly receiving a text message from Britney Spears stating that she was divorcing Federline. Graham facilitated media interviews from around the globe and coached key spokespeople for these opportunities as the incident spiraled into world news. Throughout the years, Graham has secured publicity for a multitude of c

In addition, he landed extensive coverage on a diverse portfolio of projects including: innovative marketing campaigns; multi-platform digital advancements; consumer products; CSR initiatives; appearances by Hollywood A-listers and world-renowned musical chart-toppers; live events attended by thousands of screaming fans; and the launch of new TV channels and a retail store. 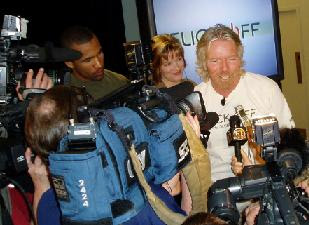 Graham is adept at quickly assessing the most impactful channels of audience engagement and leveraging them in the right way, at the right time. He has written more than 400 news releases and he is skilled at developing all kinds of effective communications products to enhance a client’s publicity toolbox (click here for free communications tools). He excels at working as part of a multi-partner team involving many stakeholders as he did on the FLICK OFF campaign featuring Richard Branson. Coaching executives and celebrities for media interviews is another one of his talents. He’s accomplished at managing photo shoots: developing creative concepts and seeing them through on shoot day.

Graham graduated from the University of Waterloo’s coop program with an honours bachelor degree in psychology and he completed his PR certification at Humber College in Toronto. He is the Vice President of Awards for the International Association of Business Communicators in Ottawa. He oversaw the prestigious IABC Ottawa Excel Awards, which took place June 1, 2010. Graham lectures regularly to PR students. He was a special guest panellist at the Rock N' Reel music and film festival for the seminar Do I Want My MTV? The Future of Music Television. 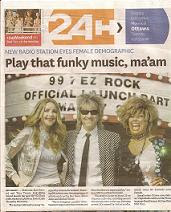 Handled media relations for the launch of Astral's new 99.7 EZ ROCK in Ottawa. A front-cover story in 24 Hours Ottawa, a front-page story in The Ottawa Citizen's Business & Technology section, priority coverage on CTV News, "A" morning, and Rogers' Daytime, and a national hit in Media in Canada are some of the publicity highlights. Close to 20 stories were secured with an estimated combined reach of approximately 750,000. 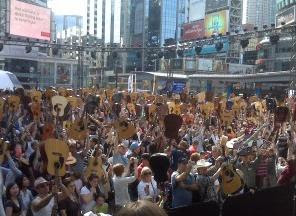 Landed millions of positive media impressions as music publicist for Luminato Toronto Festival of Arts & Creativity; coverage contributed to the largest attendance to date (more than 1.5 million); as part of the campaign, generated extensive coverage by creating and overseeing a media event where reporters learned to play guitar; publicity alone attracted 1,623 guitarists to Toronto's Yonge-Dundas Square to set a new Canadian record for largest guitar ensemble (pictured); click here to view 1,623 guitarists performing in unison at the event; successfully managed on-site media logistics for the above event and Randy Bachman's performance for thousands at Luminato First Night. 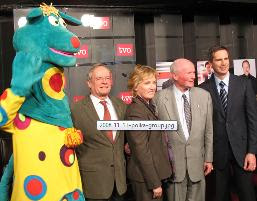 Achieved substantial positive media coverage for TVO and elevated its profile within target audiences through strategic media relations counsel; advised on and participated in the execution of a stakeholder event involving Ontario Premier Dalton McGuinty. 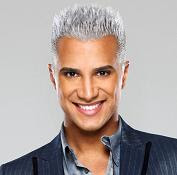 Crafted and carried out a tour phase communications plan as unit publicist for Cycle 3 of Canada's Next Top Model; developed the production and broadcast phase comm. strategies; coverage reached millions in major markets across Canada; successfully managed CTV media on set during the taping of this reality series. Photo: CTV.

Made media the co-stars of a special TV segment for The Comedy Network original series Hotbox. The publicity campaign reached millions nationwide with coverage across platforms. 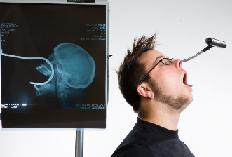 Put the spotlight on the second season of Discovery Channel's Guinea Pig series with a new strategic communications campaign that garnered national publicity.

Click Here to view a video clip from the media event.

Secured millions of positive media impressions for the MuchMusic Video Awards and handled media logistics for this massive awards event.

"(Graham is) exceptionally skilled in terms of communications, media relations, and event management with contributions that have had a significant positive impact on our company’s profile...His recommendations get results and we have found his approach to executive communications coaching to be highly effective..He is a master at building relationships and leveraging them in the right way to get traction in the media." – Raja Khanna, Co-CEO of GlassBOX Television and Co-Founder of QuickPlay Media Inc.

"Graham is in an elite class of communications professionals." – Brad Schwartz, Senior VP & GM of CTV's Much MTV Group

"I recently had the opportunity to hire Graham Machacek to oversee the PR strategy and execution for a top-priority stakeholder event for TVO. From the word go, working with Graham was an absolute pleasure. He was results-driven, detail-oriented, and a true pro every step of the way. And when all was said and done, Graham fully delivered on his promise of 'impactful results when it counts.'” – Jill Javet, VP, Corporate Relations, TVO

"Thanks for your great work in pulling together a unique promotional strategy, taking responsibility for our network deliverables, and getting great press participation." – David Smith, VP, S&S Productions Inc.

"You will be hard pressed to find a company that's as actively engaged in its clients' projects as Graham Machacek & Assoc. If you want a PR professional who takes an active interest in really understanding your company and its products, and someone who will work tirelessly to get you results, look no further. Graham doesn't just issue a release - he provides a 360-degree overview that drills down to the core messages and highlights the tough questions before they're asked. He takes a vested interest in ensuring that major impact is achieved." – Quincy Raby, Director of Marketing Communications, GlassBOX Television

“Graham implemented a publicity strategy that complemented Luminato’s goals and utilized his expertise to garner media impressions when it mattered most. His innovative approach led to coverage in key print, television, radio, and online outlets. From day one, Graham proved he was the right person for the job.” – Laura Hughes, Manager, Media Relations & Communications, Luminato Toronto Festival of Arts & Creativity

"Working with Graham was amazing. He brought a fresh perspective and unique strategies. His ideas and creativity, along with a gung-ho cast and crew, allowed us to create unique experiences for the media, which are certain to pay off." – Sara McLaren, Comm. Mgr, The Comedy Network

"Graham was a pleasure to work with. He clearly defined a plan to meet or exceed expectations, worked well with our team including producers and talent, and delivered a comprehensive report of achievements at the end of the project. We look forward to working with him again on future projects." – Carolyn Fell Delamere, Comm. Mgr, Discovery Channel

"You're one of the best media people I've worked with in Canada." – Carole Pope

"Thanks to the smooth ministrations of one Graham Machacek of MuchMusic ... we were quickly escorted inside, placed in a safe environment – literally a few feet away from where The Killers would perform." – Sun Media

"At the MuchMusic Video Awards, fans and the media have access and are treated with respect…take lessons from the Much PR crew." – Canada.com

"Thanks again for all your help, it really made the piece." – CBS News

"You’re the best, thanks for your help!" – Us Weekly

"Thank you for moving those pics so swiftly and handily...they hit our demo right on the head." – Metro

"We thank Graham Machecek for his contributions as Director of Programming. He raised the level of programming so that members receive more value for their money." – International Association of Business Communicators, Alliance of Independent Practitioners Division

YOUR PUBLICITY TOOLBOX
Click Here for FREE content to assist with your publicity, media relations, and communications campaigns.

*Big buzz campaigns at international, national, regional, and local levels that get results.

*Communications coaching for executives, other staff, and celebrities.

Masterful media relations for celebrities at events and junkets, and for launch campaigns.

*Developing core concepts and key messages designed to cut through into print, online, and on radio and TV.

*Bios serving as the ultimate career encapsulators for executives, staff, and celebrities.

*Smart editorial for brochures and manuals.

*Photographers: top photojournalists and fashion photogs (including stylists and hair/make up artists).